Just a few days ago, I had to do something mildly depressing: go back to the house I grew up in one last time and go through all of my possessions before the house is sold. I spent my first 18 years in this little yellow house in Midwest City, Oklahoma until I graduated high school and made the move to Nashville. Obviously, a thousand memories still live in this place, while the house itself remained in my mother’s possession even after I made the move to a different state. Since I was moving from a house to my current apartment, I streamlined, only taking what I felt I absolutely needed at my new residence and leaving a lot of stuff behind for the day that I purchase my own home and can move it all there. But with my mother living by herself at the moment, she felt it was time to move on and didn’t really feel the need to have a 3-bedroom house all for just one person. On top of that, it was harder and harder to maintain the preservation of the home and becoming very expensive for one single person to keep up with. So she put the house on the market and moved out, informing me of the matter so that I may come back and go through all of my old closets, rooms, and attic to take what I wanted and throw away what I need no longer.

Along with my childhood pet Max dying earlier this year, the selling of this house really was the last nail in the coffin of what I collectively remember as my “childhood”. It was definitely odd to walk into the house and see the vast emptiness of it all. There were no longer tables in the living room, no stands, lamps, or TVs to be found. The echo and reverb was incredibly powerful now that there were no objects to absorb my voice. I had to keep my jacket bundled since there was no heat to warm me up. No water either. Just electricity for the moment powering the lights that will help me put the rest of my things in their inevitable graves, with a select few deemed important enough to continue living a life with me in Nashville.

In the midst of this new-found melancholy construction of my mind, a distinct thought occurred to me: hey, I have a lot of stuff here, some of it more than 20 years old…maybe it’s worth some money! It has to be, right? After all, isn’t that partially why eBay was invented? And why their advertisements always tell me that I am sitting on a fortune if I would just go through my belongings and sell it all? Suddenly, my situation didn’t seem so bad after all. See, I was a kid, yes, but I have always been a very forward-thinking tyke, always looking towards the future. As much as I consumed toys and games, I still recognized the value in collector’s items and rare products. I remembered how many things I saved when I was just 10 or 11 years old, thinking “This will be worth something some day!”. Well now is the time to cash in, my friend, I’ve been waiting many moons for this.

So I make my way through my first closet and bam, already a couple of things that should sell amazingly on eBay! I had 2 original Furby toys (before they got hit with the lawsuit) in their original boxes with all instructions included. I also found my stacks of 1st edition Pokemon cards, at least several hundred of them. With my 21st-century cell phone in hand, I quickly pulled up the internet to check them out on eBay and find out how much money I could expect to materialize in my way-too-thin Sonic the Hedgehog wallet. My watery lips suddenly turned dry. 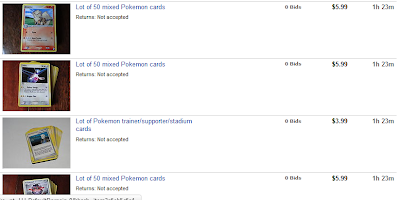 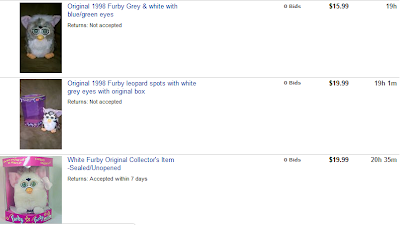 I was a tad bit shocked when I found countless pages of items with 0 bids. You mean…nobody wants this shit? I also had a sackful of Teenie Beanies still in their original packaging, which were the limited edition Beanie Babies sold at McDonalds during the peak of that particular craze. I checked eBay and saw auctions for as little as $0.99 for a lot of Teenie Beanies…no bids. That’s right, these items are so unwanted that people are not willing to spend the same amount of money it costs to buy a box of dental floss for a handful of plush toys that, only a decade ago, sold for hundreds of dollars.

I put some more thought into it though and started to make some sense out of it: Pokemon cards and Furby dolls were pretty abundant at one point in time. So of course there are tons and tons of people out there like me with closets full of unwanted cards and dolls. There’s a surplus of these items since they happened to be severely popular. What I needed to do was find the TRUE collector’s items that I still possessed, items that were more limited in quantity. Price is a reflection of supply and demand after all; I needed something that maybe only a few people in the world still had.

Thankfully, I grew up as a hardcore comic book geek, making weekly trips to the comics store ever since I was in 3rd grade. What this means is that due to my obsession, I made two trips to one of the biggest comic book conventions at that time: Wizard World in Chicago, Illinois. Not only was I able to meet the biggest comic books artists/writers in the world and get all of my comics autographed but I was also able to score some limited edition swag, some of it exclusive to the convention itself. As I waded through my old bedroom closet, I stumbled upon some items that I was SURE would net some dollars online. I found 6 sample packs of the Star Wars Young Jedi card game. These were not packs you could find in stores, these were limited sample editions not intended for resale that were given out at these conventions. So my mind lit up thinking “Star Wars! eBayers love Star Wars! I’m guaranteed to sell these since I know the nerds out there will snap em up!” And then I found another would-be jackpot: super limited edition Star Wars watches that came in a LIGHTSABER case! Again, these were items that were given out, unavailable for purchase, super rare. With a LIGHTSABER case included! The nerds are going to have a GODDAMNED STROKE when they see this!

Wha? HOW?! I surely thought that Star Wars was the end-all, be-all of collector’s items. If limited edition Star Wars swag wouldn’t sell, was there any hope left for my other items? The answer was a screaming, wailing “No”. No one wanted my Power Rangers Electronic Arcade Bank. Nobody wanted my Teenage Mutant Ninja Turtles baseball glove. Nobody wanted any of it. What happened to the collector’s market? What happened to the hordes of die-hard fans who were foaming at the mouth trying to find limited and rare items? What happened to the stories of people finding something insignificant in their attic and selling it on eBay for $10,000?

That’s when I realized that there never was a collectors market; it was invented. Invented by the same marketing teams whose job was to push products for mass consumption. We were duped. The only people who bought and held onto these items were people like me, people who didn’t even WANT the item in the first place but had the hopes that one day, a fortune would be made. And in turn, these toy and game companies are able to sell products that no one really wants. They make profit, collect the check and watch their bank accounts expand by throwing out yet another well-hidden carrot that dangles in front of our face, and when we finally get it, realize that it was just a mirage.

The phrases “Limited Edition” and “Collector’s Item” are their new best friends, little big-eyed puppy dogs they can sick on consumers. It sticks a nail in their head and creates a false sense of limited-supply with heavy-demand. And this works brilliantly due to the basic psychology of the human mind that dates back for centuries: we simply want what others do not have. We want to be VIP, we want to be on the guest list, we want to own things that are exclusive to only a select few. Who wants to go to a dance club that has no line snaking out the front of it and wrapping around the corner like a nocturnal anaconda, where everyone is allowed in and there is plenty of room for all? When things are more limited, our brains heap more value on top of it, give more significance to it. It’s the same way Nike can manufacture the same shoe but with a “limited edition” color scheme and charge twice as much and wait as it sells out in a single day.

So after going through all of my closets, old rooms, and boxes and boxes of things in the attic, I realized that the things I wanted to hold onto were things that had no re-sale value but were still inherently important to me. Old journals, notes from girls from junior high, my very first comic book I drew when I was in kindergarten, the first draft of the first screenplay I ever wrote when I was only 16. Photos of friends, family, pets. Yearbooks. Items that contain not monetary value but personal value that matters to me and me only, the best kind. The warmest kind. Collector’s items that only I can appreciate.

And what will I do with the cards, dolls, toys and watches? Take them to Goodwill and hope that some children out there will love them; not because of how much profit they can make online but because they have never seen any of these toys and will use them like they were originally intended for. Either way, I’ll be saying my final goodbyes to them, things I’ve held onto that no longer have a place in my life, for I have moved on. A final goodbye that also extends to that old yellow house.